Luis Enrique has been in the wine business for almost 17 years. His first contact with wine was when he visit the Robert Mondavi office in Irvine, Orange County CA, while he was studying Marketing and Sales 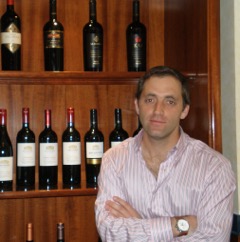 in the University of California, and he was hooked.

Right after the visit he went to the To Kalon Vineyard in Napa and start a journey that its been running until now.

In 2003 he was back in Chile and he started to work in Viña Errázuriz, high quality wine producer and one of the most important wineries in Chile.

Joining the Marketing Department at the winery he was able to spend a lot of time with wine journalists and critics, learning more about wine and studying the chilean wine industry from inside, and later be presenting Chile as a viticultural paradise in many different places.

In 2011 he joined Viña Anakena, world class producer with vineyards in the best sites of Chile, like the Leyda Valley, the best terroir for cool climate wines such as Sauvignon Blanc and Pinot Noir, and Peumo, the Premium site for Carmenere.

Luis Enrique has been married with Maria Jose for 13 years, with two sons, Leon and Beltran, and two baby twins.

He is also a mountain biker and a surfer, trying to spend every weekend with his family and friends in the Pacific Ocean or in the Andes Mountains in Chile, South America.